Nitrogen is all around us. In fact, almost 80 percent of our air contains nitrogen. Nitrogen becomes a problem after it is exposed to the extreme temperature in the combustion chamber of our engines. It is at this point that the gas that is normally inert becomes reactive, which causes it to release harmful nitrogen oxide or NOx from the exhaust system into the atmosphere. That’s where the EGR valve plays an integral role.

In this article, we will explore what exactly an EGR valve is, what it does, and how to know if yours is going bad.

What is the EGR valve?

The EGR (exhaust gas recirculation) valve is integral to your vehicle’s engine management system. As the name implies, the EGR valve recirculates a predetermined amount of exhaust gas to the engine’s intake system which results in reduced fuel consumption, increased engine efficiency, and lower Noxemissions.

In newer vehicle models, the traditional EGR valve system has been replaced with a newer device that is designed to cool the emissions before they pass from your engine back into your emission system. This newer system is cooled by both engine coolant and ambient air.

How does the EGR work?

The EGR helps minimize the amount of NOx that is released into the air by sending a precise amount of exhaust gas to be sent back through the intake system. This process effectively changes the entire chemical makeup of the air that enters the engine.

The diluted mixture contains less oxygen and therefore burns much slower, which decreases the temperature in the combustion chamber, reducing NOx production and providing a much cleaner and more efficient exhaust.

When operating correctly, the EGR valve only opens or closes at very particular times. The EGR temperature sensor is the device that sends the information that the valve needs in order to know when to open. The moment the engine cools to a certain temperature, the valve automatically closes again.

If an EGR pipe is clogged your engine can run into the same types of problems that a bad EGR sensor can cause. The temperature of the engine can rise to dangerously high levels.

Fortunately, if your EGR pipe is clogged, a mechanic can fix the issue pretty easily. The EGR pipe just needs to be removed and then sprayed and scrubbed with a carburetor cleaner. This cleaning solution is formulated to loosen up any deposited buildups before the mechanic scrubs it free with a specially designed brush with metal bristles.

Heynneman European for Your Audi’s Needs

If you suspect that your EGR valve is going bad, 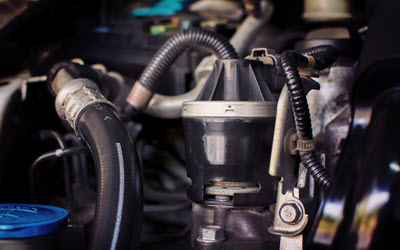 you should bring your car to our reputable and licensed mechanics right away. If you live in the Larkspur, Kentfield, Corte, Mill Valley, San Anselmo, Fairfax, or San Rafael, CA area, for the best service, contact Heynneman European! Call us today to set up your convenient appointment.