There are a number of issues that can arise in a vehicle, but having problems with a car as historically reliable as BMW can be concerning. Rest assured, however, that most problems are fixable and not costly, so long as they are addressed immediately and not allowed to deteriorate.

Problems with the alternator seal are easy to fix but incredibly important. The seal itself serves a vital role in keeping the alternator in your car functioning properly, so any issues detected with the seal should be handled as soon as possible. On that note, there are a number of key signs that can be seen when the alternator seal is in need of replacing.

This component is obviously quite important, but the alternator seal is responsible for its protection. This seal is put in place to keep oil contained within the system but if the bracket is compromised, the oil may leak into the alternator. Unfortunately, oil leaking into the alternator can cause serious problems under the hood.

Inside BMWs, the alternator seal is notoriously a bad match for the gasket. This results in constant alternator seal leaks. In fact, this problem has been known to arise in BMW models that have mileage only in the 10,000 mile range. As oil leaks into the alternator, it may cause it to eventually fail, which may stop the car from functioning completely.

Without an alternator, you may manage to get your car started, but your battery will be drained faster than before, as all the electrical components will be sucking energy from the battery and it won’t be recharged by the alternator. For that reason, it is important to spot leaks in the alternator seal as quickly as possible.

Signs of a Bad Alternator Seal

As mentioned, there are signs that your alternator seal may be leaking. Fortunately, you can keep an eye out for these common problems in order to notice the issue as soon as it emerges.

As you may have guessed, an alternator seal leak leaves behind a fairly large amount of oil over time. Check under the hood and on the floor of your garage to see if you notice any leaking oil or stains. Specifically, open your hood and locate the alternator to see if you spot any oil directly underneath where it is.

As discussed, the alternator is responsible for powering the electrical components of your car. If there oil is leaking, it is likely that your electronics may not work properly while the alternator deteriorates. Take notice of any changes to how your BMWs dashboard or other electrical features act when you suspect the alternator seal may have a leak.

Fortunately, BMWs come equipped with an alternator malfunction indicator light on the gauge cluster. This will obviously be the largest indicator that something has gone wrong with your alternator. If illuminated, it’s best to take your car to the shop right away so that no further problems develop.

Heynneman European For Your BMW Needs

At Heynneman European, we understand how 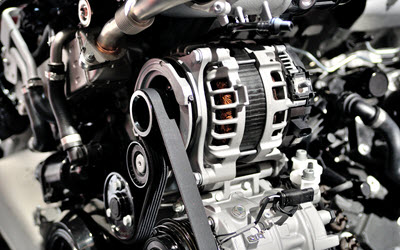 much a reliable performance from your BMW means to you. We are a European auto repair shop that has been proudly serving clients in the areas of Larkspur, Kentfield, Corte, Mill Valley, San Anselmo, Fairfax, and San Rafael, CA. Our experienced technicians have seen all manner of vehicle issues and are more than capable of fixing a problem such as a faulty alternator seal.

Additionally, given that this problem is so widespread in BMW models, we have seen it before and have acquired the necessary components for the replacement with the experience to identify this issue quickly. Come in or give us a call to schedule an appointment and get your vehicle professionally inspected today. We look forward to working with you in the near future.